Home Newsroom Press Releases At Wegmans, Reducing Waste Is a Win for the Community, Environment, and the Company

At Wegmans, Reducing Waste Is a Win for the Community, Environment, and the Company

ROCHESTER, NY, Apr 18, 2018 – At Wegmans Food Markets, living by the reduce, reuse, recycle principles is a sustainability triple win doing whats right for the community, the environment, and the company. The regional supermarket chain has long been focused on minimizing waste, and now, with the phased rollout of its Zero Waste program, is taking measurable steps to improve and implement programs that not only increase recycling rates and minimize waste at the store level, but also help people in need and provide efficiencies to the business.

Following a successful one-store pilot in 2016, Wegmans has rolled out its Zero Waste program to five additional stores, with more slated for the future. In partnership with Rubicon Global, the leader in sustainable, cloud-based waste and recycling solutions, Wegmans is working toward eliminating all forms of waste at its stores, with food waste front and center.

Food waste is how we can make the most significant change, not only for whats ending up in landfills, but for our communities as well, said Jason Wadsworth, Wegmans manager of sustainability.

Its estimated that between 30 and 40 percent of the U.S. food supply is never consumed, yet according to the USDA, more than 15 million U.S. households faced food insecurity at some point in 2016. Environmentally, unused food left sitting in landfills generates billions of metric tons of methane gas, not to mention the wasted resources used to grow, process, and transport it.

Wegmans has been tackling the issues of hunger and food waste in our communities for many years, said Wadsworth. Both present complex challenges that certainly cant be solved overnight, but as a food company, we know we can make a positive impact, and we are committed to doing so.

Wegmans efforts to minimize food waste date back to the 1970s, and with every year, the company continues to expand its efforts. Following the EPAs Food Recovery Hierarchy, Wegmans first aims to minimize food waste at the source by using less-than-perfect produce and slightly blemished food in its culinary operations. Next, unsaleable perishable food items are picked up at Wegmans stores throughout the week by local food pantries and food banks that can get it into the hands of those who need it most. Next, food scraps are diverted from landfills by offering them as feed for local livestock. Finally, food scraps are sent for anaerobic digestion to be turned into energy, or sent for composting.

In addition to the Zero Waste initiative, Wegmans is an active participant in the EPAs Food Recovery Challenge and has signed on as one of the first U.S. Food Loss and Waste 2030 Champions, making the commitment to reduce food loss and waste by 50 percent by the year 2030. Through partnerships with Rubicon, local food banks and pantries, and local haulers, Wegmans tracks all the food coming out of its stores whether its waste, being donated, or diverted from landfills as feed for livestock, composting, or anaerobic digestion.

Its all about continuous improvement, said Wadsworth. We have programs in place at all our stores aimed at minimizing waste, but weve committed to the Zero Waste journey because we see opportunity for improvement within those established programs, as well as how we educate our store employees.  The more they understand the programs, why theyre in place, their importance, and how they benefit the environment, community, and the company, the more successful we are in achieving our goals and the sustainability triple win.

Wegmans Food Markets, Inc. is a 95-store supermarket chain with stores in New York, Pennsylvania, New Jersey, Virginia, Maryland, and Massachusetts. The family-owned company, recognized as an industry leader and innovator, celebrated its 100th anniversary in 2016. Wegmans has been named one of the 100 Best Companies to Work For by FORTUNE magazine for 21 consecutive years, ranking #2 in 2018. 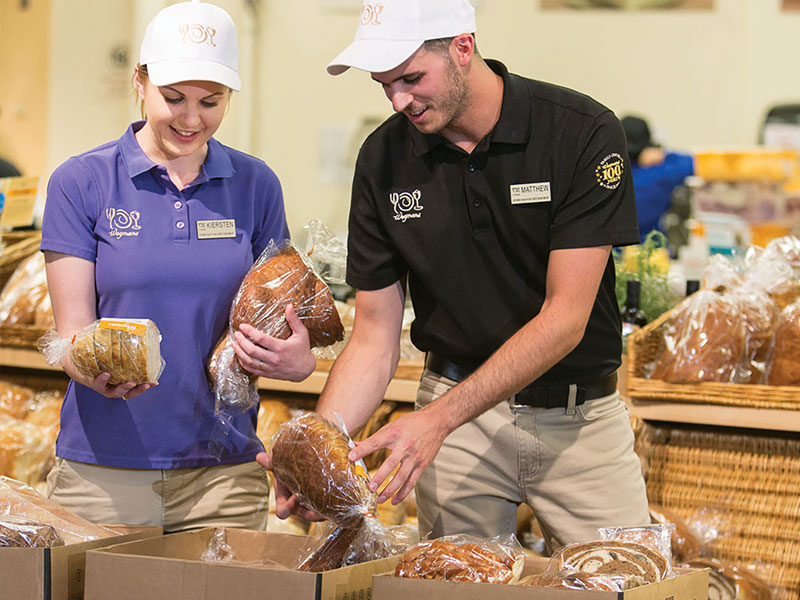